Argo Tsukishima is one of the supporting characters in Guilty Crown. He is a member of the "Funeral Parlor" who is an expert in hand-to-hand and knife combat.

Argo has a hot-headed personality and becomes easily angered whenever someone insults or questions Gai's authority, showing that he is very loyal to him like most members of Funeral Parlor. Of all the members, he is initially the most disdainful of Shu due to his resentment of Gai, even forcing him to apologize when he calls Gai "selfish", stating that if he insults him, he's insulting everyone who believes in him as well. At one point, he even goes so far as to call Shu a "spoiled brat".

Like all Voids, Argo's Void (a black stick that shoots out black holes) reflects a hidden aspect of his personality i.e. the fact that he is a very gloomy person deep down, something that was initially unknown even to him. In general, however, Argo is rather grumpy, as he is almost never seen smiling.

Although he can be abrasive at times, Argo nevertheless has very strong moral standards; he is instantly disgusted by the ruthless dictator Shu has become and attempts to help Souta, who Shu had left to fend for himself underwater. He also refuses to submit to Shu, saying he would rather die than follow him, which results in him getting thrown in a cell. It's implied, however, that this is partially out of loyalty to Gai, as he later compares the two, asking Shu if he honestly thinks Voids alone makes him an effective leader. Nevertheless, he is horrified upon learning that someone's Void breaking causes them to die, to the point that he tries to convince Shu to stop using Voids since the very thing he's using to try and save the students could ultimately be what kills them.

However, even with these standards, Argo is a pragmatist through and through; he always goes along with Gai's "needs of the many" style plans and is frustrated by Shu's inability to see the bigger picture, even being perfectly willing to die for Gai if the need arises. During the final battle, he also attempts to convince Ayase to leave Shu behind instead of attempting to rescue him, as he didn't want to risk losing both of them and was convinced there was little to no chance that Shu could survive, though against all odds he does.

Despite supposedly being a teenager, Argo is a tall man, standing several inches taller than Shu and being at least as tall as Gai. He has spiky black hair, with a blonde streak in the middle. He is always seen wearing his Funeral Parlor uniform.

Not much is known about his early life other than he is a second-year from Ryusen High.

He is seen helping Gai out in different situations and informs him about the 'whitecoats' taking hostages in a building. He also warns him about Daryl, who has a new mecha in his possession. To save the hostages, Argo distracts the GHQ in order for Gai to carry out his plans. Later, he tells Shu to apologize after saying that only the confident and selfish people succeeded in life (he was referring to Gai) and asks him to join them, he asks Shu if he could extract Voids from anyone. After witnessing his Void's power, Argo asks himself if he's such a dark person deep down since his Void was the "Light that brings Darkness." He gets angry at Shu because he questioned Gai's plan, causing Shu to run outside. Later, everyone carries out the plan to destroy the Leukocyte and they eventually succeed. Argo is saved by Arisa's grandfather at his estate and was sent past the wall to retrieve Arisa before the UN came to eliminate Japan. Argo helps Shu and the gang to save Inori. As he and the others are separated from Shu, they hold off Daryl and his new gespenst. As the building starts to collapse he convinces Ayase to escape and leave Shu.

Argo's void is a black stick that releases a light that brings forth darkness. Shu used his void in a mock-battle against Ayase and afterward, Argo realizes what a depressing person he is. After the mock-battle, Argo awakened and was informed of the event and states " A light the brings darkness...am I really gloomy guy deep down."

The fact that Shu was able to draw a void from Argo also suggests that he is 17 years of age or younger. 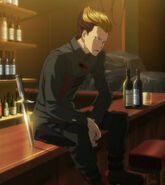 Argo introducing himself to Shu