Ayase Shinomiya (篠宮 綾瀬, Shinomiya Ayase) is one of the main supporting characters in Guilty Crown. She is a member from the group "Funeral Parlor" who pilots the humanoid robot "Endlave" and she is wheelchair-bound, although she apparently wasn't always.

Ayase can be described as a beautiful and slender young woman. She has brown hair she puts up in a ponytail and chestnut brown eyes. Ayase is disabled and uses a futuristic red wheelchair for mobility.

She wears a red and black battle suit for combat, several different comfortable casual outfits (often t-shirts and jeans) and sleeps in a white nightdress. She also temporarily wore the uniform of Tennouzu High School in Episode 12 when she was forced to stay at the school together with other Funeral Parlor members.

Initially, Ayase is quite cold to Shu Ouma due to getting off on the wrong foot with him as a result of him bringing up her disability. Nevertheless, she is a kind and strong-willed person who does all she can to help Funeral Parlor, and doesn't hesitate to give credit where credit is due; when Shu suspects that he cheated in the mock battle due to the fact that he used a Void, Ayase disagrees, saying he simply made use of the one thing he was good at. She is shown to have a crush on Gai Tsutsugami, blushing whenever he compliments her and always being concerned for his safety. However, she denies this whenever it's pointed out to her, claiming she only has respect for him.

Ayase doesn't like being pitied for her disability, insisting that it no way inhibits her ability to do her job and getting angry whenever people try to help her. However, this trait ultimately proves to be more trouble than it's worth, since it causes her to overestimate herself and forget that she simply can't do everything that ordinary people can e.g. run away when people attempt to sexually harass her. This insecurity becomes especially apparent when she goes undercover in Tennozu High School, where she's lost her ability to pilot an Endlave, which to her is like losing her legs all over again. As a result, her Void manifests as a pair of Endlave-esque legs, which enable her to sprint at great distances and even fly.

Ayase can also be rather hypocritical; she teases Shu for his obvious feelings for Inori Yuzuriha, and yet when Shu brings up her equally obvious feelings for Gai Tsutsugami, she denies them vehemently. She also frequently chews out Shu for wallowing in self-pity, yet does the same thing herself after Gai's death, going so far as to scold Tsugumi by saying that she wouldn't care if she died saving Gai, since to her she's only "half-alive" as it is, words that deeply hurt Tsugumi. However, after gaining the ability to fly using her Void, Ayase no longer complains and seems to regain her confidence.

Later on in the series, she seems to develop feelings for Shu, in place of her unrequited feelings for Gai. They were very subtle at first during the second part of the series, but it became more noticeable during later episodes. She cries when Shu takes the Apocalypse Virus upon himself after she pleads for him not to do it, since it could potentially kill. Shu also compliments her after carrying her to the Endlave control unit to which Ayase blushed, and later on, Ayase tells Shu not to die with her Void because she just "lent" her heart to him. In Episode 22, Ayase's feelings towards Shu became more noticeable as she refuses to abandon Shu in the collapsing GHQ building as Argo tells her that she must escape.

Overtime, Ayase becomes more and more determined, particularly after her aforementioned confidence boost. This is most noticeable when she crawls out of her wheelchair and slides down a railing in an attempt to get to the third and final Void Genome, though this ultimately proves unnecessary as Shu grabs and uses it instead. Right before the final battle, Ayase asks for Shu to help her into the Endlave control unit, implying that she's come to terms with her disability and learned to rely on others from time to time, instead of always trying to be self-sufficient.

Ayase is first seen in episode 1, however, she only showed up twice. The first was when she helped Inori Yuzuriha to escape and second the time was when she destroyed a GHQ mecha that was about to attack Gai Tsutsugami and the others. She also yelled at Shu Ouma to get out of her way. Ayase is later seen asking Tsugumi where her closest target was, saying she wanted to do all she could and is startled. She apologizes later to Gai, saying it was her fault. However she blushes when he tells her he was glad she was alive and tells Tsugumi to quit talking when she teases her. Later Ayase, along with the other Funeral Parlor members, help free the hostages from the GHQ after receiving orders from Gai. Ayase helps Gai and the others rescue Kenji Kido from the GHQ's prison. She blames Shu for Inori changing her attitude (by disobeying Gai's orders to rescue Shu). Ayase is seen again when Shu is revealed to the Undertakers and beats him to a pulp when he says he doesn't want to give trouble to a "girl in a wheelchair". She helps him with his training to become an official Funeral Parlor. Later, Shu runs into her and they converse with each other, with Shu having to turn away for most of the conversation because she was wearing her night and she told him not to look at her. She tells him that if he wants to prove himself to everyone, he should win the mock battle. Shu ends up winning from using Argo's Void when Shu apologizes, Ayase tells him he was just using a part of him that makes him unique. She gets angry at Kido when he asks her what Gai's been up to only to be interrupted by Tsugumi, who informs everyone that the area Gai was in had been attacked. After he is revealed to be okay, they form a plan to get the Leukocyte destroyed by invading the GHQ. There she encounters Daryl Yan, who is angry because she commandeered his Steiner and chokes her. Oogumo saves her and they continue with the plan and eventually succeed. In episode 19 , she wanted to be injected with the Void Genome because Shu gave her the courage and power to stand up and fight that this time it is her turn to stand up on her own even if it means a shootout with Gai. But Shu ended up injecting himself with the last Void Genome that was resulted when the ampoule rolled to him by Ayase and Segai Waltz. In Episode 21, Ayase became the pilot of Daryl's Endlave and she used this Endlave as the main fighting unit of the Funeral Parlor; quickly dispatching any Endlaves that she came across with. The only problem that she had is when she got to face Daryl with his new Endlave and surrounded by almost 12 Endlaves.

Ayase's void enables Ayase to stand on her disabled legs and they give the impression of Endlave legs. Her void allows the ability of increased speed and flight. This is presented in Episode 13 when a group of thugs attacks the quarantined school with a stolen military humvee and Endlave.

Ayase being choked by Daryl

Everyone watches in worry

Ayase in her dress 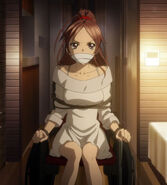 Ayase tied up and gagged