GHQ was created by the UN to control Japan during and after Lost Christmas. Their headquarters, the 24th Ward, is based in a mega-structure, built on the reclaimed land off Tokyo bay and can be seen as a symbol of Japan after the event of "Lost Christmas". 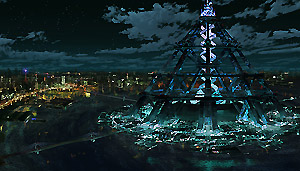 A special quarantine unit, also feared as the "white clothes" by the residents of the fort, is also based in the 24th Ward, where Keido Shuichiro serves as the chief.

A multinational pharmaceutical company based in the 24th Ward, responsible for the basic research of the apocalypse virus and its vaccine production. Ouma Haruka works as a senior researcher here.

Retrieved from "https://guiltycrown.fandom.com/wiki/GHQ?oldid=8048"
Community content is available under CC-BY-SA unless otherwise noted.