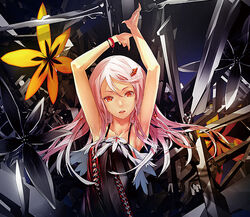 It's official, Guilty Crown will be continuing through the winter on Fuji Television's anime block noitaminA. The show will be airing in 2 hour blocks starting in October, and going all the way until March. So, the fall lineup of noitaminA is Un-Go followed by Guilty Grown, whereas the winter lineup will be the recently announced Black Rock Shooter followed by further new episodes of Guilty Crown.

In other news, visual novel maker Nitroplus will be producing a PC game based on this fall's episodes of Guilty Crown. The game was previously known as Lost X, but will now be called Guilty Crown Lost Christmas. Jin Haganeya, one of the writers of Guilty Crown, will be assisting the development of the game. For more information, visit Crunchyroll.

Retrieved from "https://guiltycrown.fandom.com/wiki/Guilty_Crown_Gets_Extended_Run?oldid=9694"
Community content is available under CC-BY-SA unless otherwise noted.