Episode 1
Hare Menjou (校条 祭, Menjō Hare) was one of the main supporting characters in Guilty Crown. She was a motion picture research club member and Shu Ouma's classmate. She lived at the same apartment block as Shu and had been to the same school as him since Junior High.

Hare had brown hair that was kept in two red bows, brown eyes, rather large breasts and she was the same height as Inori Yuzuriha.

She usually wore her school uniform, although she wore other outfits on occasion too.

Hare has a very kind and carefree personality. Because of this, her Void takes the form of bandages that have the ability to repair and heal anything. However, she can also be firm at times; she often worries about Shu Ouma's social status and often scolds him for being insensitive, telling him that he's too dense.

Although she appears innocent, Hare also has a rather perverted side; she is disappointed when she sees Shu accidentally grope Kanon Kusama when he had intended to extract Hare's Void, even saying that if Shu wanted to grope her, she would have gladly let him do it. She also shows off her body when the group are at the beach as a way of getting Shu's attention and even presses her breasts against him.

Hare also has feelings for Shu, resulting in her becoming a love rival for Inori Yuzuriha, something the latter never seems to notice. She is shown to be rather jealous of Inori, saying that if Shu has feelings for her, she wouldn't have a chance of being with him. Despite this, she gets angry when Shu attempts to kiss her out of grief, as she could tell he was just using her as a replacement for Inori, who he had been separated from. Like Inori, she always remains loyal to Shu even when everyone else has turned on him, and always has faith in him.

She thanks Ayase Shinomiya for helping Shu to be more confident with himself. Through Shu's mastered use of the King's hand, she is able to use her bandages to heal people and objects, showing her compassion. This is most apparent in Episode 15.

Hare is seen traveling to school with Shu Ouma, asking him why he looked so tired. She became upset when Shu just shook it off and Hare informs him that the terrorist attack in Ward 24 caused the GHQ to step up their security. At school, she complains saying Shu wasn't succeeding because he was too dense. While walking down the hallway with Kanon Kusama, Shu gropes Kanon and Hare seems disappointed and says that Shu should've just asked her. She is seen amazed with everyone else that Inori Yuzuriha is their new classmate and they leave her alone when Yahiro Samukawa tells them to. Hare, on a train a few days later, is surprised to see Shu get arrested by the GHQ and is seen breaking down into tears because of it. After Shu reunites with his classmates after the jailbreak, Hare and Shu run into Yahiro which leads Hare to stalk him for the rest of that day. Eventually she learns about Shu's secret and power where she becomes sympathetic towards Shu and comes to his aid whenever he requests her or is compelled to do so.

Hare becomes worried due to the rising tension of the blockade and in turn Shu reassures her in the worst case that he will fight. To which, she says if he gets hurt, then she will help by healing him. During this scene, Hare is the first one mention that he is capable of being a king. These events leads to Shu becoming student president.

Due to a future implementation of a void ranking system and shortage of vaccine for the apocalypse virus, the lowest ranking members start to go outside of the school grounds to prove the numbers don't signify their importance as well as to get the vaccine for the virus. It's because of this, a number of enclaves were sent out to kill these students. Souta Tamadate runs into a car that he thought Hare can repair. As Hare is about to repair the car, an enclave spots Hare and shoots a bullet to the car. Hare is blown into the explosion and Shu attempts to rescue Hare. They both are fatally injured, however, Shu took more damage from covering Hare.

Being the first to maintain consciousness, Hare uses her void to revive Shu. She idolizes Shu as the fairy tale hero from her past, the Kind King, to whom she first fell in love with at a young age and entrusts Shu to be the great king that she sees within him. When a GHQ helicopter's turret suddenly shot and destroyed Hare's Void, her body began to crystallize, and as she slowly died from both her injuries and the destruction of her Void, she professed her love for Shu as she passed while crawling slowly to reach for his hand yet couldn't touch. After regaining consciousness and seeing Hare's corpse crystallize and shatter, Shu launched a violent rage filled assault against the enemy. Yahiro, who witnessed Hare's death from afar, lied to Shu about Hare being killed by a genomic weapon. Hare's death overall left Shu emotionally shattered, to the point where he became ruthless and tyrannical towards others afterwards. She is seen smiling when Hare passed implying that she had no regrets and is happy with saving Shu. In episode 22, after a few years have passed, Shu and the gang celebrated her birthday.

Hare's Void was called Lover's Bandages. Through her Void, she was able to resurrect or heal any person. When used, the Void wraps itself around the target and begins to glow and reverse any and all damages. The process took time depending on both the object or person being healed and the extent of the damages.

When first drawn by Shu Ouma, he described it as being "warm" like Hare herself.

Physically, the void resembled a long white segmented strip with purple jewels running along its length that glow when the Void's power is in use. When held, the Void moves around the user's arm on its own, as if flowing. Hare's Void continued to heal Shu even after being broken.

Shu and Hare talk on their way to school

Hare telling Shu of the Kind King she loved 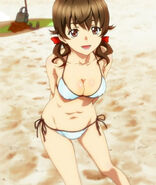 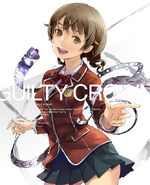 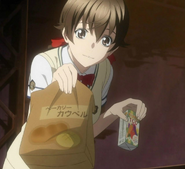