Kurosu Ouma (桜満 玄周, Ōma Kurosu) was the father of Mana Ouma and Shu Ouma (the main male protagonist) as well as the scientist who discovered Void Genome to be an inhibitor of Apocalypse Virus where he somewhat holds connection with Scrooge and Carol.

Kurosu has brown hair, brown eyes (Shu Ouma's hair and it's color greatly resembles that of Kurosu as they are biologically a family) and his beard is often left unshaved and messy due to his lack of concern to himself because most of times he's busy researching.

He is quite tall and mostly seen with white-laboratorium jacket and glasses.

Kurosu was smart, clever, goofy and a hard-worker proven by him spending most of his time in his research. Because he always believed himself to be self-sufficient, he was not good at interacting with others. Thus, he named his son Shu Ouma (which means "group" according to him), perhaps in hopes that Shu would grow up to be different.

Even though he is plotted to be very clueless and blunt, Haruka (Kurosu's second wife) describes him as "an interesting man".

Kurosu used to be a teacher at Tennozu First High School, where his son was currently studying. He was an expert on the Apocalypse Virus and led its research with Shuichiro Keido who was his friend and fellow scientist.

After the death of his first wife Saeko Shijou during Shu Ouma's birth, he married Haruka. Kurosu died during Lost Christmas and it was later revealed that Shuuichiro killed Kurosu out of hatred. 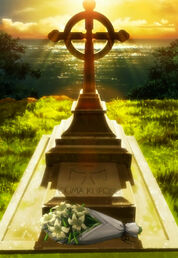 Kurosu gravesite by the Ocean in Episode 8 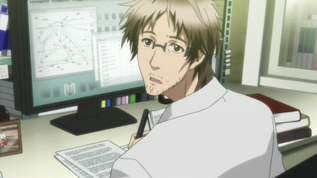 Kurosu Ouma during his research. 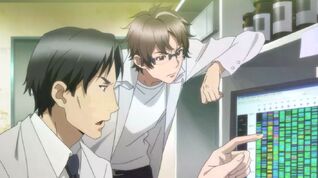 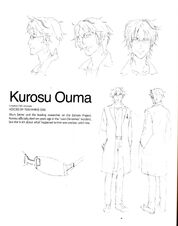 Character Design
Add a photo to this gallery

Retrieved from "https://guiltycrown.fandom.com/wiki/Kurosu_Ouma?oldid=11236"
Community content is available under CC-BY-SA unless otherwise noted.