Mana Ouma (桜満 真名 (マナ), Ōma Mana) is one of the main antagonists of Guilty Crown. She is Shu's older sister and has a mysterious connection with Gai, Inori, and Shuichiro Keido. She is the first person to come in contact with the Apocalypse Virus.

Mana has long, whitish pink hair that has a white flower pin on the left side with bangs parted in the middle while the front strands of her hair are tied, orange/red eyes and her reincarnated body is very beautiful where it holds a strong resemblance to Inori Yuzuriha.

She wears a light pink dress that matches her hair. At times in the flashbacks she wears a white uniform and a pink winter coat. In her reincarnated form, she wears a black dress with a cut down the middle and a violet skirt.

At first, Mana is portrayed as a kind, sweet girl, gentle and loving sister to Shu Ouma before she became sadistic when she became infected with the virus. So much so that she tried to have Triton kill himself in order for her to be with Shu. When infected, she wanted to "tie the knot" with Shu and mix their genes to make a new world together only to have Shu push her away and cause an uproar in December 24th 2029, "The Lost Christmas" incident.

In Episode 12, she is revealed to be spiteful towards Shu for rejecting her, and was willing to harm him. While in Inori Yuzuriha, she is shown to be very sadistic; killing anyone who would harm Inori in a very brutal manner while smiling. She also seems to still be in love with Shu, attempting to rape him in Episode 18. She also looks down on Inori calling her a fake. Her kind personality is revealed to be fake in Episode 20 as she was infected with the virus since she was five and she had declared Shu as her Adam before he was born.

Mana lived with her parents in Oshima where she first found the meteorite that had the Apocalypse Virus. She was infected by the virus and she started developing her powers as the virus took its toll on her psyche which led her to choose her brother Shu Ouma before his birth as her mate, her "Adam".

After her mother's death, she was left alone with Shu on Oshima. On the summer before Lost Christmas, she was showing Shu her favorite spot on the island when they met a drowning Gai Tsutsugami. They saved his life and nicknamed him "Triton", Mana saying it was because they found him by the sea.

Mana, Shu and Gai spent that summer together and left for Tokyo together when her father remarried. She and her new stepmother waited in a church for a family gathering and she was able to trick Haruka into leaving to look for Kurosu under the pretext that he might've stayed behind due to his workaholic tendencies. She then tricked Gai into shooting himself, while using his blood as lipstick in order to realize her plan of making Shu her "Adam". When Shu came, she attempted to marry him. Once he noticed part of her hair crystallize, he called her a monster, shocked and afraid. Which caused her to realize the virus' effect on her. In fear she asked for help but a young Shu could only back away in fear, causing her to activate her powers causing Lost Christmas, destroying her own body but parts of her were imbedded into everyone's voids.

Mana debuts in episode 12 when it is revealed that Shu had forgotten about her due to the shock suffered during Lost Christmas.

Mana and Shu had discovered the body of a young boy washed up shore on the beach, unconscious and with bruises covering his body. Trying to revive the young boy, she gives him CPR and manages to save him. Because he was found at sea, Mana happily tells him that she will call him Triton. The young boy is later revealed to be Gai. The three of them: Shu, Gai, and Mana spend the happiest summer of their lives before their happiness ended on Lost Christmas.

One day when Mana was having a conversation with Shu, she asks him what he would do if she were to get married. She even says that she might even marry Triton but eventually says that she is joking and wants to marry Shu, kissing him. The very young Shu simply stares at his sister, not knowing how to react. Another scene shows Triton, the young Gai confront Mana and tells her that those who are infected with the virus become crazy and different, noticing the changes in Mana's personality. Mana lifts her head to reveal the purple crystals forming on the side of her neck, showing that she indeed is the victim of the virus. Mana was the first person to get infected with the Apocalypse Virus.

Inori was later used as a sacrifice, so her soul would enter Inori's body to cause another uproar worldwide with Shuichiro. Before getting infected she displayed a kind and gentle side to Shu and Triton.

On Christmas Day, Triton decides to reveal to Shu about Mana's condition at the Church of Roppongi but Mana shows herself first instead of Shu. She gives Triton a box, telling him that it his Christmas present. He opens it to see a black gun and a few bullets. Mana tells him that he is her "knight" and asks him to protect her, pointing to the golden star sitting on top of the Christmas tree in the church. Having been in love with Mana for a long time, Triton points the gun and fires. It is later shown that Mana had tricked him into shooting himself as the bullet backlashes and hits him in the stomach. Shu arrives at the church not soon after and sees Triton bleeding on the floor. Mana, in a frightening state tells him that she wants to marry him. After Shu pushed her away and calling her a monster, she ended up destroying herself with her uncontrollable power and asked them for help in that day.

During the second Lost Christmas, her rebirth was stopped and died with Gai, who had noted before that the reason he fought in Funeral Parlor was to hold a certain woman in his arms. Some parts of Mana still reside in Inori as shown in episode 16, when Shu was telling that he only needs is Inori and Mana's voice is heard only to let Shu look confused. In episode 18, it was revealed that Mana is actually the one attacking people through Inori's body. She tells Inori that she is a monster and to come back to her before she ends up killing Shu. In episode 20, Mana starts to take over Inori's body but she tries her best to suppress her.

At the end of Episode 21, Mana was reborn by sacrificing Inori; Gai needed to erase Inori's memories for Mana to be reborn. In Episode 22, Mana rushes to Shu and hugs him and says that a fake monster shouldn't take her body, only to let Shu get angry and pushes Mana again, rejecting her for the second time. As Gai battles Shu with Mana's void, she starts the Fourth Apocalypse worldwide; encasing everyone into crystals, only to be stopped when Inori's spirit comes to help Shu defeat Gai. As Gai was defeated, Mana started to crystallize. Mana then appears with Gai in the utopia of Da'ath at Shu's hallucination in the same form she appeared in before causing Lost Christmas with Gai embracing her, thus freeing her from her role of Eve and the two being able to rest at last.

As the patient zero of the Apocalypse Virus, Mana holds complete control over it, using its crytalization effects to achieve never before seen abilities by others infected by it. As a young child, she was seen forming and manipulating crystals in her hand. After being rejected by Shu, she triggered the Lost Christmas event, spreading the Virus at an alarmingly fast rate, completely crystalizing thousands of people in mere seconds. However due to the fact that her powers were still immature, this caused her to enter a coma.

Years later her powers had grown exponentially. She displayed terraforming abilities by covering the land with the crystals, and the ability to manipulate said crystals to fashion makeshift weapons such as large spikes for impalement or as restraints. After her second death, she displayed further powers through her vessel Inori, which grew even further due to her contact with the various Voids which held pieces of her soul. While inside Inori, she could materialize crystal spikes from her body, which she used to stab Arisa. When channeling her powers, Inori assumed a monster-like form with incredible physical abilities, such as speed, strength and endurance, enough to destroy multiple Endlaves on her own with relative ease.

After fully reincarnating through Inori, Mana's powers reached their full potential, as she could now spread the Virus worldwide, instantly crystalizing anyone in any place of the world.

In the final episode, Gai pulls out Mana's void that looks like Inori Yuzuriha's Singer Sword, only it has a darker complex. 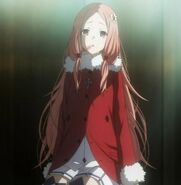