none
Scrooge was the main character of the prequel visual novel, Guilty Crown: Lost Christmas that was released on 26th July 2012. Before escaping with Carol, he was a subject of human experiments in an, as of yet, unknown facility.

It is interesting to note that he possesses the Power of the Kings and bears a striking resemblance to Shu Ouma, who is the protagonist of the visual novel's sequel, Guilty Crown. He is referred to by his codename "Scrooge" given by Carol as he had forgotten his real name.

Scrooge's ability is the result of a failed experiment to replicate the Power of the Kings. When his hand comes in contact with a human body, it causes the victim to crystallize as per the effects of the Apocalypse Virus meaning he is unable to draw their Voids however he is able to draw Carol's Void(s) with no damage to her whatsoever. From her, he is able to draw a variety of Voids, as opposed to any other person who would have one single, unique void.

Though not much is known about him, Scrooge has been shown to have a serious and mature personality. He has also been shown to show no mercy to his enemies and has been seen killing them without a second thought.

As far as clothing is concerned, Scrooge wears a dark grey shirt, black trousers and shoes. In addition to this, he wears a red coat with the hood, which he usually uses to keep his face hidden.

Scrooge has a physical appearance that is akin to that of Shu Ouma. He has brown hair in a similar style to Shu and has red eyes.

The game begins with Scrooge waking up with amnesia on a operation chamber. After attacking the scientists with his power, Scrooge escapes and encounters Carol. Partnering up with her, Scrooge and Carol attempt to make their escape. As they make their way through the corridors, Carol explains the Apocalypse Virus and its origins to him. Leaving the main building, Scrooge and Carol are attacked by Past using an Endlave. Getting overpowered, Carol explains Scrooge's power to him and lets him summon a void weapon from her.Using the void's power, Scrooge destroys the Endlave and the pair escape from the facility. As they leave, Carol shows Scrooge the crash site of the meteor Wormwood which the virus was discovered on.

The pair then decide to make a break for Tokyo to locate Daath. Along the way, they battle against Anti Bodies hit squads sent by GHQ. During one of their pit stops, Carol picks up a stray dog and names it, Doluudo. Suddenly, the pair are noticed by the Anti-Bodies and make a break for it. Escaping to the harbor, the trio encounter Major Makoto Waltz Segai who surrounds them with a hit squad. Questioning them, Scrooge and Carol inadvertently reveals the existence of Daath to Segai. Using a chainsaw blade void, Scrooge fights back against the squad and their Endlaves. However, the pair are soon put into bind by the sudden arrival of a mysterious void creature. Suddenly, Scrooge inadvertently grabs Doluudo with his right arm and pulls out a void. Using it, Scrooge manages to defeat the void creature and the pair make their escape again. As they leave Scrooge apologizes to Carol for killing Doluudo, but she laughs it off and explains that the dog was likely another test subject. The pair then mourn Doluudo.

After traveling for months, Scrooge and Carol finally make it to Tokyo in time for Christmas. Attacking another research lab, Scrooge and Carol interrogate one of the researchers who was also at the facility where Scrooge and Carol were kept. The researcher reveals that they were doing experiments on evolution with the Apocalypse Virus and that they should question Kurosu Ouma because his research is way ahead of theirs. After escaping the lab, the pair stop at a hotel and decide to talk with Kurosu next.

The next morning, Scrooge wakes up at a hotel and begins to suffer headaches again. Consoling him, Carol comes up and hugs him. That day, the pair visit Kurosu at the university and confront him. Realizing that they are not with Da'ath, Kurosu reveals his research and explains what the King's Power, Void Genome and what the purpose of them are: proof of the Adam who will recreate the new world with Eve, his daughter, Mana Ouma. After the explanation, Kurosu asks Scrooge to examine him body, so they can figure out the Void Genome and potentially save his daughter. Scrooge replies that he will think about it.

On Christmas Eve, Scrooge and Carol are fighting against some Anti-Body hits squads. As they fight, Scrooge thinks back to their conversation with Kurosu and the rules for pulling out voids. In the flashback, Kurosu explains that only children under seven can have their voids pulled out likely due to the fact that Wormwood had fallen seven years prior. This leads Scrooge to wonder why he can pull out voids from Carol. Suddenly, Carol hears the sound of a Endlave downtown. Noting that it is weird, Scrooge realizes that they are after Kurosu and the pair decide to save him and kill Mana Ouma.

Racing to the university, Scrooge and Carol arrive too late to save Kurosu who has already been killed by Shuichiro Keido. Chasing after him, Scrooge and Carol hear Haruka Ouma's screams and realize that Kurosu's body has been discovered. However, they decide to continue chasing after Keido. Catching him, the pair attempt to question Keido, however, they are interrupted by a blonde-haired woman. Greeting them, the woman introduces herself as 'Present.' Talking, Present summons void crystals, while letting Keido escape. She then reveals the source of her name from A Christmas Carol. However, Scrooge remarks that the order is different since Past is supposed to come first. Present reveals that they already met Past as Past arrives in a new prototype Endlave.

Greeting the group, Past declares that they will now play some tag and starts fighting them. During the fight, Scrooge tries to summon a void from Carol, but is blocked by Present. However, the battle is soon interrupted by Mana Ouma's awakening as Eve, announcing the start of Lost Christmas. Escaping, Scrooge and Carol race to the church. As Scrooge tries to enter the church, he is interrupted by Past again. Fighting Past off, Scrooge is too late to save Mana who destroys herself and the church. Searching the rubble, Scrooge discovers Gai Tsutsugami in the wreckage. Pulling him out, he imparts Gai with some advice to fight if he doesn't want to be selected out before leaving.

Looking around further, Scrooge comes across Shu Ouma and wonders if Mana protected him. But noticing the Endlave above Shu, Scrooge figures that Past must have protected him. Looking at the burning cityscape, Scrooge races to reunite with Carol while fighting off soldiers and Endlaves. Suddenly, he hears Mana singing and decides to search for the source, hoping to meet up with Carol along the way. Fighting off some more soldiers, Scrooge encounters Present again who turns the soldiers into monsters. Engaging both Present and the monsters, Scrooge fights and as he does, contemplates his nature as a monster.

Suddenly, the battle is interrupted by a monster-like Endlave. It is driven by Past who has gone on a rampage. Dodging the Endlave's attacks, Scrooge silently calls out for Carol. Hearing his call, Carol leaps down from her safe spot. Reaching out his arm, Scrooge reaches into her and pulls out a baby-like void. Engaging Past, Scroge figures out that the pilot cockpit is likely in a trailer. Finding it, Scrooge enters it and discovers Past's true identity.

Contemplating on her cancerous body, Scrooge decides to end Past's misery and kills her. However, to Scrooge and Carol's surprise, the Endlave does not stop. Growing crystals, Past continues their rampage and Scrooge and Carol are forced to fight again. After a long battle, Scrooge and Carol finally kill Past and destroy the rampaging Endlave with a spear void weapon.

After the battle, Scrooge and Carol locate Mana. Scrooge decides to kill Mana to save her, however, he discovers that he cannot touch her. Present then appears and tells the pair that it is useless because the real Mana has already died and is now an immortal ghost, kept alive by the will of the world. Suddenly, Present attacks the pair and Scrooge is forced to fend her off with his own skills, since he had overused Carol's voids. During the battle, Present confesses her love for Scrooge, angering him. Suddenly, the ground starts shaking harder, indicating that Mana's song is almost finished. During the process, the ground beneath the group collapses and Scrooge, Carol, Past and Mana fall into the hole.

Some time later, Scrooge regains consciousness only to discover himself pinned by crystals with Present on top of him. Looking around, Scrooge asks where they are and Present claims that they are in Cocytus. Suddenly, Scrooge notices a cage with Mana Ouma within it, along with Carol who is trapped in a crystal pillar. Calling out to Carol, Scrooge notices Present removing her clothes. Present reveals that she doesn't have a gender because her body is assimilating with the Apocalypse Virus. Present then tries to assimilate Scrooge and get him to join her.

However, Present is stopped by Carol who gets Scrooge to pull out her void. Scrooge succeeds and pulls out a locus void which devours and kills Present. Freeing himself, Scrooge realizes Carol has betrayed him and angrily asks Carol if she is 'Yet to Come.' Carol denies it and reveals that Yet to Come are actually the babies within her womb. Scrooge then regains his memories and recalls that he and Carol were lovers until the doctors induced him into forcibly impregnating her, causing both her womb and the babies within to crystallize too. Carol further reveals that the babies cannot live or die, as they will just keep on dying and reincarnating each time Scrooge pulls out a void. At this point, Scrooge figures out that Carol was getting revenge on him.

Defeated, Scrooge asks Carol what she wants from him and Carol replies that she wants nothing. Understanding, Scrooge makes a final choice. In the Normal Ending (Reward), Scrooge decides to claim his reward and pulls out his final void weapon from Carol, a Crown of Thorns. The pair then use it against Mana while yelling "Rock n' Roll!" In the True Ending (Atonement), Scrooge decides to save the world and pulls out the Empyrean Rose of Heaven. The pair then wish each other a Merry Christmas as they use it to send Mana into a deep sleep.

In the aftermath of the incident, Yuu discovers Scrooge's right hand and congratulates him and Carol for helping Da'ath get one step closer to completing the Void Genome.

Scrooge is seen to have a variant of the Power of Kings. However he has also been shown to have the power over the crystals of the Apocalypse Virus, which he uses to kill his enemies. 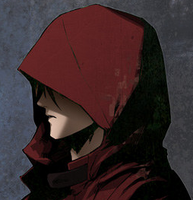 Scrooge kills someone with the crystals

Scrooge from the OVA

Scrooge with Carol and her Void

Add a photo to this gallery

Retrieved from "https://guiltycrown.fandom.com/wiki/Scrooge?oldid=11206"
Community content is available under CC-BY-SA unless otherwise noted.