Souta Tamadate is one of the main supporting characters in Guilty Crown. He is a motion picture research club member and is Shu's classmate.

He is a kind person, who cares for his friends. He is annoyed that Shu is introverted, as such he wishes Shu would be more direct with him. He is forceful, usually pulling others in his pace. He is often told that he can't "read the mood". However, his personality allows a person to open up to him. Due to this, his void takes shape of a camera that allows him to open anything. Not only is he a big Egoist fan of Inori, but he also admits feelings for her which causes an uneasy rivalry between him and Shu.

He is seen with Yahiro asking Shu about the project that was for their club. Shu tells them he'll finish it by the deadline and they left him to do so. Souta is seen again when Inori is shown as their new classmate and tries to talk to her. However, he is stopped by Yahiro who tells him that he shouldn't be that way since she'll be with them for the rest of the year. At P.E, when Shu agreed with another classmate that Inori looked like a doll in real life, Souta calls him a moron and warns Shu not to say that to Inori's face. Later, he is seen listening to music in his headphones until Shu runs up to him and pulls out his Void, leaving him unconscious. He is seen the next day discussing with his classmates about Shu's capture by the GHQ.

After the second coming of Lost Christmas, the students are confined to a section of the city where all the surviving students take refuge in the school academy. Corruptive events have led up to the school reconsidering their student body president, Arisa Kuhouin, and end up choosing Shu, accompanied by Yahiro Samukawa. Yahiro proposes the Void Ranking System that ranks the voids from A to F, placing Souta at the bottom which denys him the privilege of vaccination since their supplies were running short. Souta is greatly offended by this discriminatory system that forces him and the rest of the low ranking voids to confront Shu to withdraw their Voids and practice with them.

unknowingly He was gathering a platoon of low ranking voids to scout the area for extra vaccines to prove their worth. Unfortunately, his selfish ambition has led him into danger when a squad of Anti-Bodies locates them. Shu attempts to rescue them but unfortunately leads to the death of Hare Menjou where Souta acknowledges that he is to blame. Shu's personality immediately changes which causes him to destroy the Endlaves out of malice, pummels Souta, and most importantly revokes his kindness where he reconsiders the validity of the Void Ranking System. Infected with the Apocalypse Virus, Souta is forced to work on hazardous conditions underwater according to Yahiro's plan, and eventually turns against Shu (by pushing him to a crater) when he was betrayed by the other students. However, he entered the terminal stage of the disease until Shu made use of his void to absorb his power as well as the virus in his body, curing Souta by infecting himself in the process. Before the final battle, he and Shu make up, promising they'll always be friends and is seen in the epilogue celebrating Hare's birthday.

Souta's void is a camera with wings situated on the side. It has the ability to open literally anything, such as metal doors, cans of food, a girl's legs, holes in a truck, etc. 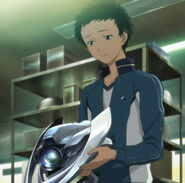 Souta with his void.

Retrieved from "https://guiltycrown.fandom.com/wiki/Souta_Tamadate?oldid=11180"
Community content is available under CC-BY-SA unless otherwise noted.